Access to light and charging is considered a vital basic need for displaced people, and almost 2.4 million SunBell solar lamps have been distributed since 2014. 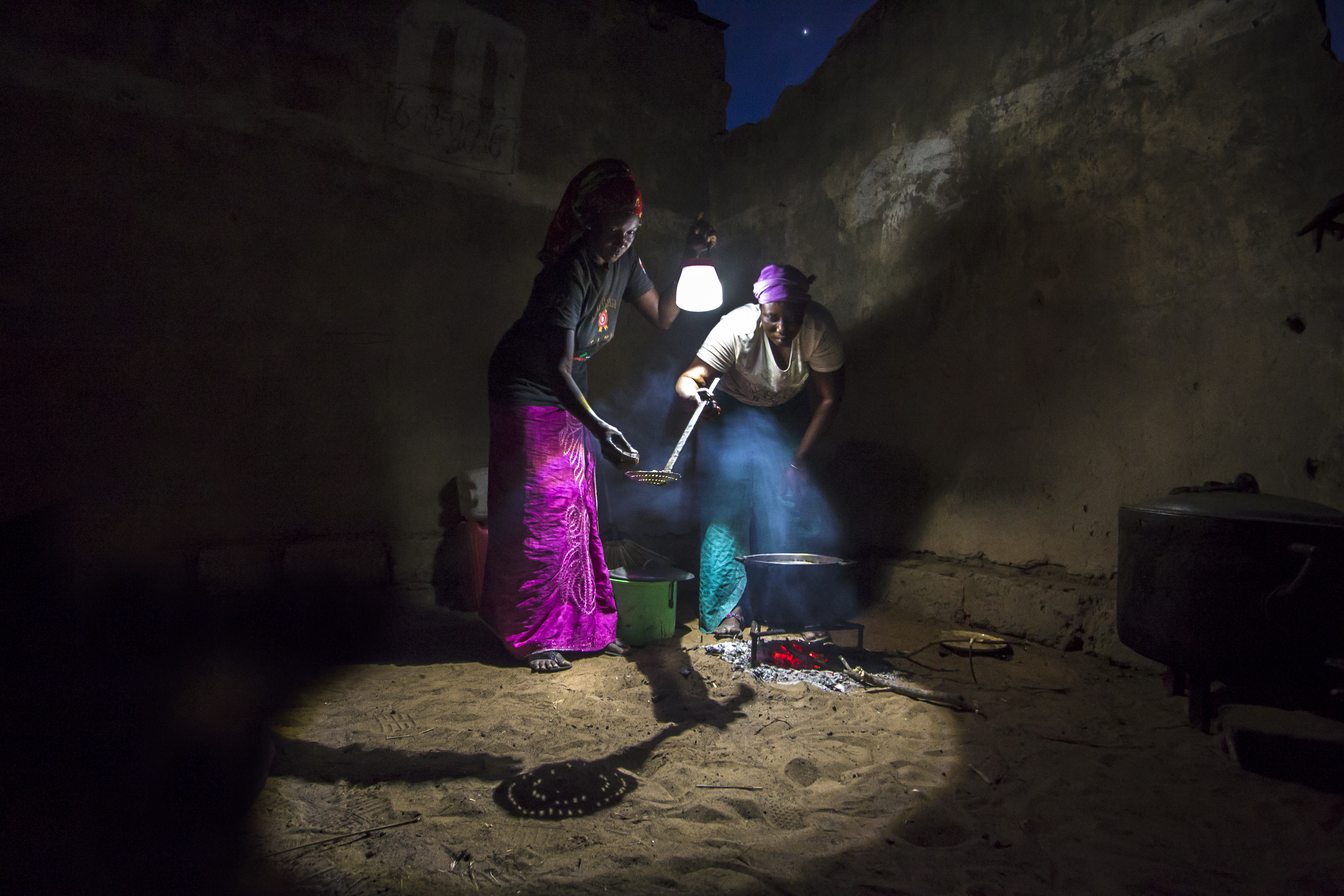 In an emergency situation, families and individuals flee their homes with nothing, or only a little more, than the clothes they wear, leaving most personal belongings behind. In addition to food, they face an urgent need for certain core relief non-food items.

“The most important core relief items distributed by the UNHCR until 2014 were plastic sheets for shelter, blankets to keep warm, a kitchen set for cooking, and soap for the body as well as clothes,” says Mats Hultgren, Chief of Supply Operations Support Section at UNHCR from 2011 to 2016. He has been responsbile for the logistic to support and deliver core relief items to emergency operations.

In 2014 another item was added to the list of basic needs: the BRIGHT SunBell, solar lamp and mobile phone charger.

”Before the solar lamp there was no light and people lived in darkness. It was very important for us to add elements of security especially for the female population in the refugee camps. The lamp provided security by giving light when going to the toilet at night or walking home after sunset essentially reducing the risk of assaults and rape,” Mats Hultgren explains. He adds how the UNHCR moreover wanted to enable the youth to study when it gets dark.

Education is essential for the future of refugees

Being able to participate in basic and higher education is essential for the future of the refugees. UNHCR states in the report Refugee Education in Crisis from 2016, that education of refugees “is crucial to the peaceful and sustainable development of the places that have welcomed them, and to the future prosperity of their own countries.” The refugee agency furthermore states in relation to Innovative Technology for Better Refugee Protection that: “In camps without electricity or light, girls and boys cannot study at night, which is often the only time they get a chance to do homework.” Read more about the educational effect of the solar lamp here.

The multifunctionality of the SunBell solar lamp was also an important argument for choosing the BRIGHT lamp, says Mats Hultgren. It works as a hanging lamp, study light, portable light, torch and hands-free neck lamp. The power of the light can be set in three different levels, operating at least 80 hours on low mode with five to seven years battery lifespan. In addition, the SunBell can charge mobile phones. All of this is provided through a renewable and environmental-friendly source of energy.

An estimated 950+/- million people – corresponding to about 11% of the world population – did not have access to electricity in 2017, according to the World Energy Outlook report published by the International Energy Agency (IEA). About 84 % of people without access to electricity reside in rural areas and more than 95 % of those living without electricity are in countries in Sub-Saharan Africa and developing Asia. Many more suffer long power cuts from unstable and poor quality energy supplies.

Almost every aspect of everyday life activities is organized around a stable and undisturbed flow of electricity accompanied with sources of light to prolong hours of productivity. All activities come to a natural stop without light, as it gets impossible to read, do homework, sports, cook, patch clothes and maintain small businesses and social life when the sun sets leaving a pitch-black scenery.

“The dark stops everything. With light, you can keep going and do things. Light is a universal need,” describes the co-founder of BRIGHT, member of the board of directors and head of the design company K8, Marius Andresen.

According to UNHCR statistics there were more than 70.8 million displaced people worldwide in 2018, whereof 25.9 million were refugees with over half of whom under the age of 18. Sub-Saharan Africa hosts an estimated 31 per cent of the world’s displaced people.

Mobile phones and internet access is critical to refugees’ safety

A representative from Innovation Norway, a network of humanitarian organizations and private companies, who supported BRIGHT from the beginning, visited the Dadaab refugee camp in Kenya after the first lamps had been distributed. Here, two refugees explained how they used the lamp.

The 23-year-old boy from Somalia living in Dadaab for the last 13 years explains how the solar lamp “has affected me in a positive way. We did not have light at home before. I read with it and as a student you need to read much, and even I have a telephone and I can charge with it.”

A 17-year-old girl from Ethiopia elucidates how the lamp “helps me do my homework at night, and my mom didn’t have a charger so it’s charging my mum’s phone.”

In a study called Connecting Refugees made by UNHCR and Accenture from 2016 it is concluded that mobile phones and internet access is as critical to refugees’ safety and security as food, shelter and water. It is described how mobile phones, “has the potential to create powerful multiplier effect, boosting the well-being of refugees and of the communities that host them” (p. 5).

Mats Hultgren, Chief of Supply Operations Support Section at UNHCR from 2011 to 2016, supports this conclusion and adds:

“Today in a refugee situation a clear majority of the adults have a mobile phone, which is an important tool to keep in contact with the ones left behind and being able to get vital information. For this reason, refugees will actually use their food rations to get their phone charged. They simply prioritise a charged mobile phone over calories.”

When designing and developing the SunBell lamp Marius Andresen explains how they approached the refugees as having the same needs as any other – not as a differentiated group with special needs. The focus has been to design good quality products that meet the demand for different markets and provide people with dignity.

“If I need a task light or study light I can dim down, I guess that is also what other people need. Today’s refugees are very modern. They are just like you and me. They also want good looking things and they also have smartphones, and it is essential for them to be able to communicate and get information, but if you don’t have anything to charge it with it is useless,” says Marius Andresen.

In partnership with W. Giertsen Energy Solutions, BRIGHT Products has delivered the SunBell to UNHCR and from the first order in November 2014 until end of 2018 almost 2,4 million lamps has been distributed. One lamp impacts around 5 people according to GOGLA impact metrics for BRIGHT, which means that the SunBell solar lamps have helped more than 10 million people to better off-grid living with access to light and charging capabilities.

As a core relief item, the SunBell has positively impacted the lives of many people and is additionally providing a safer and healthier environment. BRIGHT is continuously working to improve solar energy products and striving to provide people with sustainable off-grid living opportunities. There is still a long way to go, but the ambition is clear – to participate in giving everybody access to clean, affordable energy.

5 things to remember when spending the night in nature!